6 Stats That Show Radio Advertising Works Better Than Ever

If you haven't tried radio ads recently, it's time to return. With the seemingly unstoppable popularity of podcasts and traditional broadcasters adding other online channels to their arsenal, radio advertising works better than ever before.

A large part of the challenge for radio, as with the telephone, is overcoming the idea that the medium is dated. In fact, just as phone numbers have moved into the digital era with features like click-to-call functionality, radio has also evolved. In a digital-first world, radio advertising reaches tens of millions of North American listeners every week. Is that an audience your business can afford to ignore? 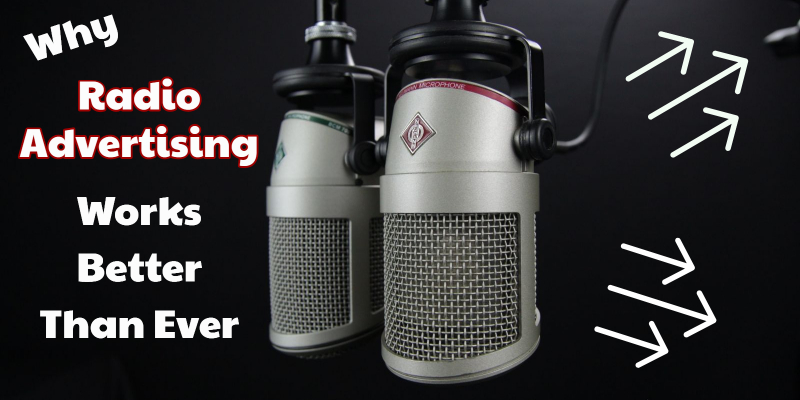 With the rapidly advancing media landscape and new technologies emerging every year, it's reasonable to ask why radio is still a thriving media channel. Put simply, radio is the perfect medium for the modern consumer. It's widely accessible, mobile, and easy to consume in almost any setting.

As noted earlier, radio has also transcended its analog broadcasting roots to move into the digital era. Most broadcasters now offer digital streaming that extends their reach beyond traditional markets, podcast apps are some of the best sellers in the Apple and Google Play stores, and services like Sirus XM and iHeartRadio have expanded to integrate with cars, cable, and every kind of mobile device. But even with this anecdotal evidence to explain why radio advertising works, we know you need hard numbers to prove that the channel is a positive promotional investment. That's why we compiled a variety of statistics to show how radio spots will move the needle for your marketing campaign. Consider the following stats that explain why radio advertising works better today than at any point in its relatively short history.

"Nine out of ten Americans listen to the radio every week."

In today's fragmented media landscape, it seems strange to talk about a media channel that reaches a majority of the country, but broadcast radio provides just that, according to Pew Research. The types of stations that people listen to are broad and diverse, of course, which is exactly why radio advertising works: your business can reach the masses, while still zeroing in on different interest groups.

"Memory encoding achieved through radio has been measured at up to 220% more effective than a TV message."

In a notable study by iHeartMedia, the same movie trailer tested on both TV and radio was shown to be significantly more memorable in its pure audio form than when accompanied by visuals. Humans have a deep and intricate relationship with sound, which makes certain music, words, and even sound effects incredibly effective at building brand awareness. Radio drives marketers to focus on the role of sound in their branding and how it impacts their target buyer. By paying attention to these unique aspects of the channel, companies can use radio to develop a more memorable audio identity that stands out from competitors and raises brand awareness in a single campaign.

"There are almost 269 million vehicles registered in the U.S."

So what, this is about radio ads isn't it? Well, sure, but do you think those millions of drivers are listening to the tranquil sounds of tire noise, roaring engines and blaring horns as they set off on the morning commute? Not a chance! The second we get into a car, most of us are thinking about what we want to listen to so that the journey flies by. For some that might be their own music, but millions will simply flip on the radio or find their favorite podcast. Both of these options give you a route into the daily commute, which means that radio advertising works for your business while other channels can't get a look in. 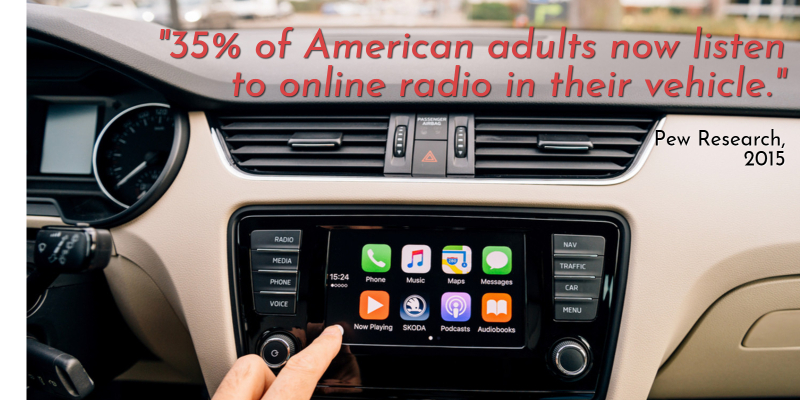 Even more importantly, this figure of 35% listening to online radio in their vehicle was up from 6% in 2010, according to a Pew Research report, showing rapid acceleration of the habit. If that trend holds - and with new models adding improved integration with mobile apps, there's no reason to believe it wouldn't - it would put the figure around half of all adults in the country today. What this shows is a shift from traditional AM/FM broadcasts to online streaming, but still placing audio and automobiles at heart of the experience. Taking together with the ongoing American love affair with our vehicles, there's every reason to expect audio to be one of the most effective ways to reach American consumers in future.

Simply throwing money at a channel doesn't demonstrate ROI, of course, but the continued investment in the medium and steady rise in the ad spend allocated to the airwaves is a strong counter to the argument that radio is on the decline. In reality, spending on radio spots approached $15 billion in 2017 and is expected to steadily add another billion over the next four years. This consistent growth speaks to the ongoing popularity of the medium and how advertisers cannot effectively replicate the advantages of audio promotions on newer platforms like YouTube or Facebook.

"Drive sales bumps between 9% to 49% across diverse business sectors."

A Nielsen study in 2015 demonstrated the diverse power of radio advertising, yielding returns of up to $17 for every dollar invested and sales increases up to 49% across some very distinct markets.

Mass retailers, for example, saw sales gains between 8-10% in categories including apparel and home improvement. For department stores in particular, radio campaigns yielded a strong return on investment compared to other retail marketing channels. Even the notoriously difficult rapid service restaurant sector, where profit margins are often razor thin, experienced a rise of 6% in customers visiting and a small uptick in the dollar value of their orders.

Success is these four sectors make a solid argument for radio to assume a greater role in the marketing mix of many different types of business. Clearly, for these businesses, radio ads were able to drive more sales, bring people into retail stores and restaurants, and more broadly amplify brand messages to increase awareness and fill sales pipelines.

For businesses of all shapes and sizes, there's are undeniable data points that prove radio advertising works. The six statistics above make a compelling case for multiple radio marketing initiatives and why they should take up a more prominent role in your media mix.Related: How Mixed Media Marketing Can Help Boost Your Business