Looking for a Toll Free Number? The Rules on Buying Them May Soon Change

Toll free numbers are considered a public resource. They range in use from customer service to advertising, and from marketing purposes to nonprofits and government agencies, who use them to provide vital health and safety services to the public.

The rules and regulations that govern how toll free numbers are assigned date back two decades. Very few changes have been made in the years since. As of this past week, all of that may soon change. 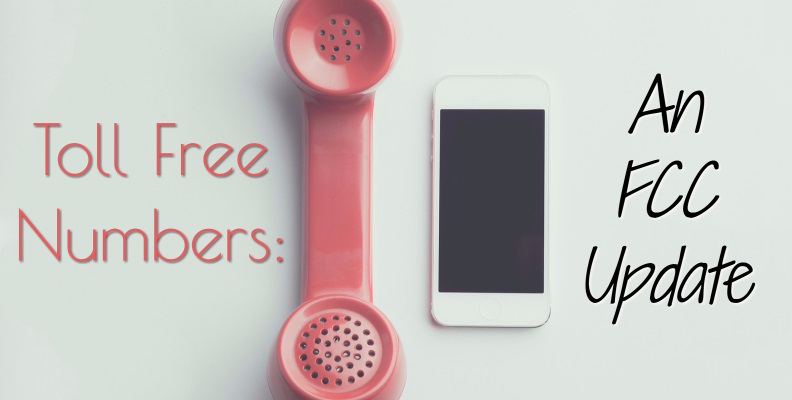 In September, the FCC announced a proposal to change the rules on how toll free numbers are assigned. This would reverse a long-standing rule that these numbers cannot be bought or sold. By doing so, the agency hopes to make acquiring high-value phone numbers, such as vanity 800 numbers and repeater numbers, a more equitable process.

So why is the FCC trying to change the rules?

Toll free numbers may be a public resource, but they are also a finite resource. The FCC realized this problem in the late nineties, when the supply of available 800 numbers ran extremely low. Their solution was to open up a new prefix, 888, to double the inventory of numbers available for use.

Opening up the new prefix created problems of its own. Regulators struggled to determine a fair and equitable way to assign the new numbers. Following a number of rule making revisions, the FCC decided to create the current system of assigning toll free numbers, the so-called “first come, first served” rule.

As toll free numbers continued to grow in popularity among businesses and nonprofits across the country, the supply of the newly released 888 prefix numbers also fell sharply. To help extend the life of the prefix, the FCC passed a rule to prevent what it called “warehousing”, which is the practice of reserving a toll free number without an end user. They also passed a rule to prevent “hoarding.” This happens when a toll free subscriber buys more numbers from a RespOrg than they intend to use.

Since the adoption of these rules, the FCC has released five more prefixes (877, 866, 855, 844, 833). Each release created its own stir as RespOrgs and end users dashed for the spare pool to reserve repeater and vanity numbers. With each new release, the industry recognized the pitfalls of first come, first served. It does not account for the value placed on specific numbers, and questions have been raised over whether some RespOrgs with better connectivity to the SOMOS database - where toll free numbers are stores and managed - may have an unfair advantage.

For these reasons, the FCC has proposed new rules to modernize toll free number assignment and to create a more equitable process for all stakeholders.

The main focus of the proposed rule change is to make the assignment of the newly released 833 prefix numbers more equitable. The FCC proposes to create an auction system that would allow end users to bid on high value numbers, thus giving all interested parties a chance to reserve a specific number.

This is a stark contrast to the “first come, first serve” rule, which allows the first RespOrg to request a number to have it. The auction system will inevitably apply to all the other prefixes. As new or existing phone numbers become available in the SOMOS spare pool, they would pass into an auction to allow interested parties to bid on their assignment.

Up to now, there has been a precedent set by the FCC that toll free numbers are a public resource and cannot be sold. This is known as the Brokering Rule. However, the proposal notes that a significant market and demand exist for the buying and selling of high-value toll free numbers.

As part of their proposal, the FCC seeks to allow the re-assignment of toll free numbers between end users for a fee and to eliminate the brokering rule to allow for a secondary market.

Assuming FCC removes the brokering rule, the warehousing rule, and the hoarding rule, as is currently proposed to allow for secondary markets, there will be an immediate emergence of phone number auctioning sites. How they will work is not dissimilar to popular auction sites such as eBay. End users who control a high-value toll free number will be able to list their phone number for auction on one of these sites, and buyers will have the opportunity to bid on them. The FCC’s proposal also allows these auction sites to set minimum auction prices for purchase (similar to Ebay’s buy-now feature) to allow a more expedient exchange on certain phone numbers.

For the first time, toll free phone numbers will be available to buy and sell, which will invariably create some major changes in the industry. It will open up an entirely new market of buying and selling phone numbers. In turn, this will allow businesses and end users to bid on and purchase phone numbers that have never been available to them before. The secondary marketplaces will not be run by a government agency, but rather third-party platforms such as RingBoost.com.

Once the rulemaking changes are finalized, they will pass to the commission for a vote. The earliest we are likely to see auction sites appear, assuming the proposed changes take effect, is late 2018.

Among the FCC, there is only one dissenting voice on the proposed rulemaking. This is an exceptionally large majority in favor of the changes. Unless the comments periods reveal a near-consensus against the proposed rulemaking from the industry, all of the changes mentioned thus far are extremely likely to pass. It is not an inevitability that they will pass, but a strong probability.

Allowing for the new auction system to develop, particularly the secondary marketplace auctions, will allow end users to find and bid on the phone numbers they may want to promote their businesses. As things stand, there is no mechanism for this to happen.

The reality is that the spare pool is mostly devoid of high value toll free phone numbers because they are reserved exceptionally quickly. An auction-based marketplace could be the answer to making better use of toll free numbers as a resource, and allow end users better access to vanity and repeater numbers.

To keep up to date with all the latest news and announcements from the FCC on this subject, visit/bookmark this resources page.