What is a RespOrg (and How Do They Operate?)

Phone numbers are fairly simple to understand, but the underlying infrastructure is quite complex. For our technically-minded readers, we like to unpack as many of the terms and technical aspects as we can. Today, we'll examine an important actor in the toll free space by answering "what is a RespOrg?"

How and why RespOrgs - or Responsible Organizations, to give them their full and rather uninspiring appellation - came about is a somewhat complex story. It begins in the late 1960’s...

RespOrgs in the History of Toll Free Numbers

Toll free phone numbers continue to be a central feature of modern communications technology. Even so,  most organizations who utilize them - from corporations to government agencies - have little to no understanding of how they actually work. Perhaps most surprising is the fact that these custom numbers are regulated wholly separately from local numbers.

In the 1930’s, government agencies wanted to create a way for Americans to contact them at no cost, rather than pay the exorbitant long distance carrier rates of the time. Such a service was deemed necessary for the provision of essential government services, including emergency services. The first iteration of toll free numbers were called Zenith numbers, and they operated on legacy manual switches that were built separate from the carriers’ other systems.

It’s important to understand that prior to the 1980’s, there was only one major player in telecom, and that was AT&T. Corporate consolidation had led to their complete market dominance. In regards to Zenith numbers, this meant AT&T was the only telecom company equipped to create a system where the end user, rather than the caller, paid the bills. This also meant AT&T had complete control over this new market.

As telecommunications technology developed further, Zenith numbers gave way to the more modern 800 prefix phone numbers we all recognize today. The service also expanded to private businesses who saw value in allowing their customers to call them free of charge. Yet despite all the benefits afforded to consumers, businesses, and government organizations, control of toll free numbers remained in the hands of a select few.

In 1982, AT&T’s monopoly was broken apart, which created seven regional operating companies called “Baby Bells” (named after AT&T’s predecessor, Bell Telephone Company). Despite the split, AT&T maintained control over much of their long distance business, including toll free. A few competitors emerged from AT&T’s breakup, but control over how toll free numbers were administered remained in the hands of a select few, which restricted competition.

Since the establishment of the North American Numbering Plan, private companies had maintained control of phone numbers. This all changed in the wake of AT&T’s breakup, when the Federal Communications Commission (FCC) took over the responsibility of managing phone numbers. It was at this point that phone numbers were first considered a public resource rather than the property of a private company.

The FCC ordered the industry to find a solution. A committee was formed, called the 800 Database Committee, which gathered regularly to discuss how they might best satisfy the FCC’s desire to create a more equitable system.

This was an intensely competitive era in telecommunications, so the meetings accomplished little for many years as the top companies vied to push a solution to favor them over the others. For ten years this continued, but in the end a system was designed that could move 800 numbers from one carrier to another upon an end user’s request. They called the process number porting.

The computer system that would be used was named the Service Management System (SMS), and the entities that would actually accomplish the porting would be known as the Responsible Organizations.

RespOrgs are at the heart of how toll free numbers are managed, yet the term remains a mystery to the average end user.

So what is a RespOrg? RespOrg is an abbreviation for Responsible Organization. Responsible organizations were created specifically to accomplish the task of porting phone numbers.

Their sole role is to facilitate the porting process by managing and administering toll free numbers through the SMS database. To this day, this is the essential function of a RespOrg. The rules governing RespOrgs have not changed much since 1993, with only a few minor changes to how they are allowed to interact with the SMS database.

To best understand how a RespOrg functions, it helps to see where they fit into the call flow of a toll free number. Here's how that works: 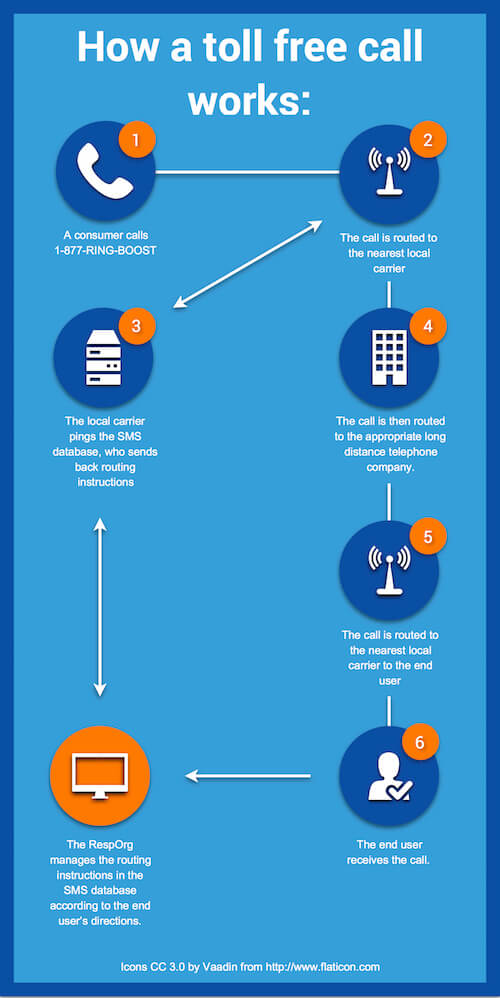 RespOrgs were ultimately created to help increase competition in the telecommunications industry and to give end users greater purchasing power in regards to their toll free subscriptions.

As part of our continuing exploration of the telecommunications sector, we'll have much more on the background of phone numbers in the United States and the organizations that administer them. Watch our Facebook feed, or join us on Linkedin, to stay up to date.