It's one of the smallest areas of land covered by the North American Numbering Plan, but when it comes to area codes Manhattan is making it big.

Already home to 646, 917, and the iconic 212 dial code, the borough will add another next week when 332 becomes available for use. Other codes overlap the island, like 718 and 347, but it's the original 212 prefix that still commands the most attention.

So how will the latest addition be received? 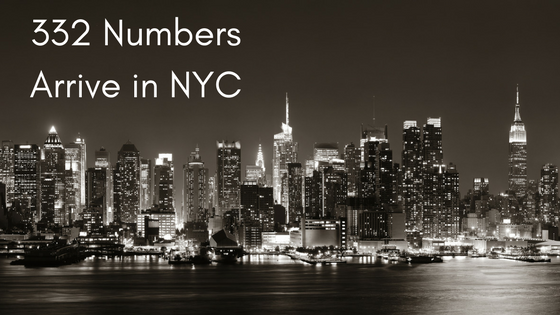 The new area code will start to roll out on June 10th and will primarily be used in Manhattan.

With a growing population and increased demand for new numbers, the city needs another overlay to keep pace. Adding the first new prefix since 2011 is the most efficient and affordable solution, according to  New York's Public Service Commission

Calls made from 332 numbers to other metro area prefixes will count as local calls. That won't matter as much as it used to, however, because so many plans now include unlimited minutes or a simple flat tariff.

No, what irks New Yorkers most about the new area code is a simpler concern that is synonymous with the city: how does it make me look?

When it comes to iconic area codes, 212 numbers have a vintage that few can match.

It was among the first codes created way back in 1947. There were 86 area assignments, many of which spanned entire states. Major metropolitan areas like Los Angeles, Chicago, and NYC were the exception. Most received an area code all of their own, lending a certain distinction to them. When it came time to add new overlays to the 1947 numbers, some in Manhattan felt annoyed at the dilution of their unique geographical identifier.

There have been many additions over the years, often in cities where residents fail to greet their new numbers warmly. Miami residents have a lot of love for "the 305," which is referenced in songs by Pitbull and puts overlay 786 in the shade. Meanwhile, on the West coast, central California is about to have its own area code shake-up as 820 numbers roll out in 2018.

Whether welcome or not, new area codes are essential as more people have multiple numbers. With more of them mobile, however, a familiar prefix is no guarantee that you know where the call recipient is based.

That trend is accelerating as millennials are attracted back to cities and numbers follow them around. They might not want to adopt the area code of their new city, whichever of them is popular at the time, but the one that comes with them can be a conversation starter that adds a sense of identity.

If a dedicated article in the New York Times isn't enough to convince you that 212 numbers are an essential part of the city's experience, the fact that they made it into a Seinfeld episode certainly should...

New area codes aren't as big of a deal as they used to be, but the fact that the originals are now considered "classics" shows just how strongly some people feel about their phone number. That sentiment should extend even more to marketers and business owners, who can use this vital contact point as a brand asset.

In that sense, 212 numbers and other vintage area codes can be an overlooked marketing asset. The same applies to custom numbers. Both of these options are effective, affordable ways to stand out from the crowd and attract more customer calls.