Every year, the number of robocalls grows.  For the first 10 months of 2018, Americans received over 38 billion robocalls, with an average of 117 per person. Robocalls are an annoyance – but scammers sometimes succeed in stealing innocent victims’ private information, making the issue also downright dangerous. Clutch, a B2B research firm in Washington, DC, surveyed nearly 700 phone owners who receive robocalls to determine the frequency and topics of robocalls. RingBoost’s Senior Vice President of Operations Rick Dionisio and Vice President of Marketing Ellen Sluder offered expert commentary on the report, explaining how robocalls impact legitimate businesses.

More Than Half of Americans Receive a Robocall Daily

For some people, a suspicious phone number appears on their phone daily – and sometimes more than once. More than half (52%) of respondents say they receive a robocall at least once a day and 39% of the total respondents receive multiple robocalls a day. 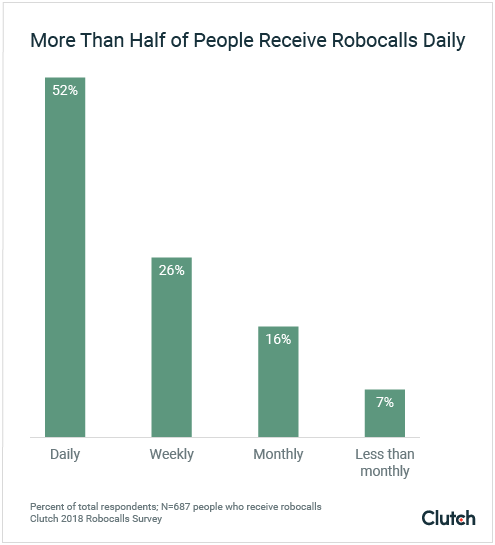 Meanwhile, 26% say they receive one robocall at least once a week. Robocalls are difficult to stop. The calls themselves are cheap to make and hard to track down. “The ability to make calls over the internet has made it extremely easy and cheap to dial a large quantity of numbers all at once for little to no cost,” said Dionisio. Robocallers can actually pretend to be other phone numbers – which many people may have noticed if they receive a large number of robocalls from their local area code. Clutch’s survey found that 44% of respondents receive a robocall with the same area code as their personal phone number daily. This phenomenon is known as “neighbor spoofing.” “It’s very easy to spoof caller ID. These callers are making it appear that the call is coming from a legitimate local number when in fact it’s not,” explained Dionisio. Sometimes, when a robocaller spoofs a phone number, the number is actually a real number owned by an individual or business. RingBoost has experienced this issue before. Ellen Sluder explained how scammers have spoofed RingBoost’s legitimate vanity phone numbers. “People call back and think RingBoost was calling them,” Sluder said. “We try very patiently to explain to them what the situation is.” “Recently, there was a scam where people claimed to be from a Social Security office and tricked others into giving their Social Security numbers,” Sluder explained. “When the receiver of the call dialed back, they would get RingBoost’s support department, and we’d have to explain to them what happened.”   Robocalls are not just frustrating, they have the power to enact damage on individuals and businesses.

What Can Be Done?

The robocall issue must be resolved, but progress has been slow so far. “The FCC, the FTC, and states’ attorney general offices are unfortunately slow to enact meaningful legislation. Robocalls and spoofing is currently at the top of the FCCs agenda. I heard it was their number two priority for 2019,” Dionisio said. A recent bipartisan bill, called the Telephone Robocall Abuse Criminal Enforcement and Deterrence Act (TRACED), was introduced in late 2018. Among other changes, if passed into law, the bill would increase the fines for robocalls, to up to three times its current amount. The bill may also decrease instances of neighbor spoofing. “The bill would also require phone companies to adopt call authentication technologies, enabling a telephone carrier to verify that incoming calls are legitimate before they reach consumers’ phones,” explained a Consumer Reports article. Read Clutch’s full survey: https://clutch.co/call-centers/answering-services/resources/how-common-are-robocalls Read RingBoost's tips on stopping Robocalls to your cell phone: https://www.ringboost.com/blog/how-to-stop-robocalls-to-your-cell-phone/