What is STIR/SHAKEN and How Will It Stop Unwanted Robocalls?

In the past year, the FCC made strides to stop illegal robocalls with increased enforcement of regulations resulting in millions of dollars in fines. But it’s not enough, and consumers cite continued increases in robocalls according to YouMail’s Robocall Index. Now, in addition to a focus on enforcement, they are looking to get to the root of the problem.  While there are types of robocalls that are allowed by law, any solicitation calls that are made with a “spoofed” number – meaning the Caller ID has been faked – are clearly illegal. For everyday people, these calls can range from annoying to infuriating and, in some cases, downright malicious. Spoofed robocalls can also have a detrimental impact on public health, with interruptions to emergency services and interference with healthcare institutions, explained a recent article by the Washington Post. As robocall-blocking technology like YouMail and Nomorobo advances, perpetrators are staying one step ahead. New schemes are popping up such as “One Ring” robocalls that motivate consumers to dial back international phone numbers in their missed call logs only to be charged many dollars per minute. Stopping short of rewriting regulations, the FCC continues to push forward initiatives that will stop the scourge of intrusive, unwanted phone calls.  Earlier this month, the FCC voted unanimously to allow phone carriers to block all robocalls by default.  Allowing carriers to make these programs opt-out (meaning you are automatically enrolled but can remove yourself) creates an easier process to provide better customer service. Now, the FCC continues its appeal directly to carriers to go further and implement anti-spoofing technologies called STIR/SHAKEN to stop these illegal robocalls in their tracks. 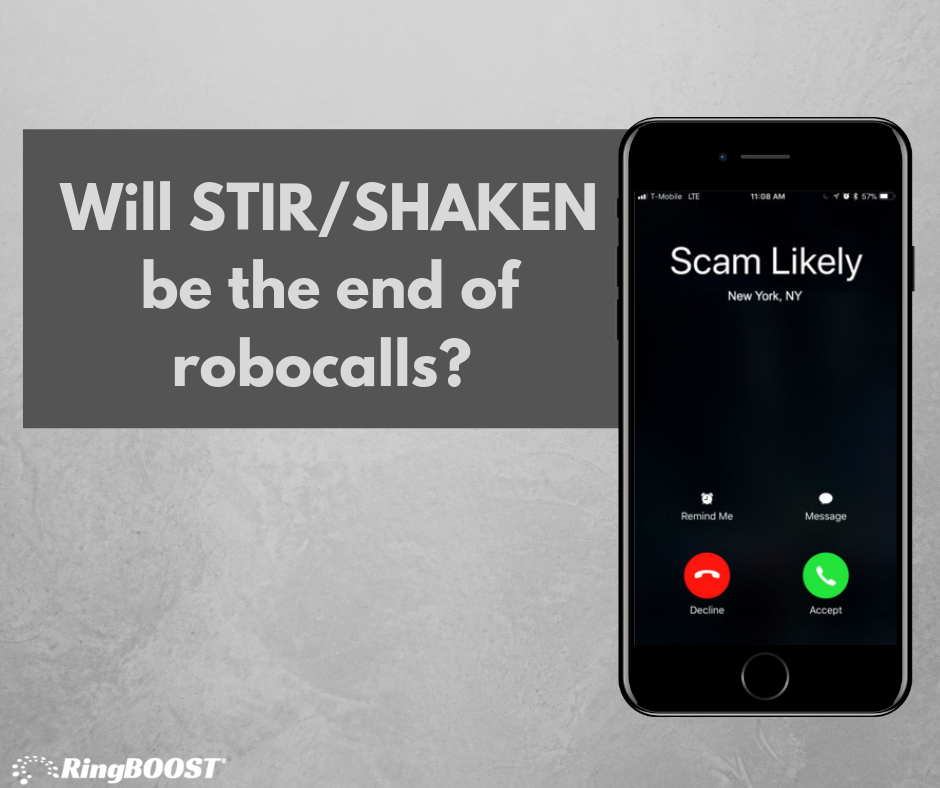 While it sounds like a term from a James Bond movie and it does work to stop the bad guys, STIR/SHAKEN is a telecom security layer that verifies from who the call is coming. The term STIR/SHAKEN is actually an acronym that stands for "Secure Telephone Identity Revisited" and "Signature-based Handling of Asserted information using toKENs." What it means is that all originating telephone numbers will have a digital certification of authenticity. When a call is received by an incoming carrier, it will validate the Caller ID information against the certificate. A mismatch would throw a red flag. STIR/SHAKEN requires infrastructure updates by the carriers and may not work with some legacy phone systems, but it is the first major move to stop robocalls before they connect.

How will STIR/SHAKEN stop spoofed robocalls?

STIR/SHAKEN is quite similar to how internet browsers can authenticate websites through the use of an SSL certificate. Depending on your carrier and how you have your settings, you can either receive a warning that the call may not be from who it claims to be from, or you might simply opt to have all calls that don’t pass STIR/SHAKEN automatically blocked. Most carriers are also implementing "white lists" that will allow you to set who you welcome robocalls from (for example, you may opt to allow your bank contact you with automated messages.)

How is STIR/SHAKEN being implemented?

Right now, the onus for implementing STIR/SHAKEN rests on the individual carriers. Making STIR/SHAKEN frameworks requirements would necessitate new regulations, which takes time. In the interim, the FCC is strongly encouraging the carriers to take on STIR/SHAKEN voluntarily, citing that it will save money in the efforts required to field and investigate consumer complaints. Most carriers have the infrastructure upgrades in process, but have yet to bring it fully to market for all calls in and out of their networks. Some companies like AT&T are promoting it as a competitive advantage and a reason to switch to them, although all signs point to it soon being a universal feature.

What is next in combating robocalls?

This week, a bill was introduced in Congress to increase transparency and strengthen enforcement of the current robocall laws on the books.  With bi-partisan backing, it seems likely to pass, but enforcement has always been difficult by the intrinsic nature of spoofing. It's difficult to identify the offending party and even harder to gather evidence of size and scale of violations. The latest FCC moves to encourage carriers to implement STIR/SHAKEN are more likely to have a greater impact on consumers’ perceptions of robocall volumes, stopping the calls before they are even received. While lawmakers, the FCC, and carriers continue to address and work on spoofed call challenges, don’t forget there are things you can do today to stop robocalls to your cell phone. It also is helpful to contact your carrier and encourage them to implement the STIR/SHAKEN security features. The more we attack this issue from all angles, the quicker it will actually end.